Bebbington argues convincingly that the King James Bible did not enjoy universal acclaim in the eighteenth century until the very end of that period. In a post at my personal blog, I excerpted Bebbington’s conclusion, which argues that “the enthusiasm for the translation of 1611 rose and fell with the growth and decay of Romantic sensibility.” In the excerpt provided below, I would like to quote his description of how the title “the Authorized Version” came to be used for the King James Bible.

A fourth explanation of the rising tide of admiration for the translation of 1611 was its redefinition as “the Authorized Version.” The title emerged for the first time in a debate provoked by the creation of the [British and Foreign] Bible Society. Whereas the society’s evangelical supporters considered the new agency a bulwark of the existing social order, the High Church party thought it a sinister development. It threatened the work of the Society for Promoting Christian Knowledge, the established Anglican organization for circulating the Scriptures. Furthermore, the timing was unfortunate. During 1804, the year of the society’s foundation, Napoleon’s forces were poised to invade the country, and in the heightened alarm, the equal presence of Dissenters alongside Churchmen on the society’s committee seemed poentially subversive. Had not Dissenters once killed an English king, Charles I? Thomas Sikes, the High Church vicar of Guilsborough, Northamptonshire, warned that, when the production of the sacred text was being entrusted to “sectaries,” nobody could be confident that they would not tamper with the translations. In order to calm such fears, John Owen, one of the society’s secretaries, replied that the organization was limited to producing versions “printed by authority.” When an opponent pointed out that this restriction had not been stated formally, the society hastened in May 1805 to revise its constitution so as to read, “The only copies in the languages of the United Kingdom to be circulated by the Society, shall be the authorised version, without note or comment.” Thus the phrase “the authorized version” was launched on the world as an apologetic device for the Bible Society. By 1819 the phrase had been heard so often that it crept for the first time into the Times newspaper, though still with a lowercase “a,” showing that it was not yet a title. The steady growth of the usage is documented in the number of times in each subsequent decade the phrase occurred in the Times: 1820s, 7; 1830s, 41; 1840s, 61; 1850s, 91. By the last of these decades, the expression was starting to be capitalized, demonstrating that it had emerged as a title. Thereafter “the Authorized Version” became the standard term for the 1611 Bible in Britain, where the phrase “King James Bible” was hardly ever used. The new title surrounded this particular text, as it was originally intended to do, with an aura of unique legitimacy. It helped forward the process by which the version became embedded more deeply in the national culture. (pg. 53-54)

You can pick up a copy of this book at any of the following online retailers: CBD, Amazon, Barnes & Noble, or Baylor University Press.

Disclaimer: This book was provided by Baylor University Press for review. I was under no obligation to offer a favorable review. 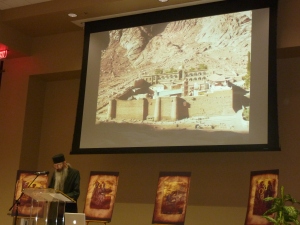 John Chitty, known in the blogosphere as Captain Headknowledge, recently had the opportunity to attend a symposium on the St. Catherine’s monastery library and the significance of the Sinai manuscripts, held at the Center for the Study of New Testament Manuscripts (CSNTM).

Here is an excerpt from the lecture notes, but I encourage you to go read the whole thing:

The monastery has never been destroyed or abandoned in all its centuries of existence. The climate at Sinai is surprisingly dry and stable, the humidity averaging from twenty to thirty percent. All of this, and the diligent care of the monks, account for the preservation of many manuscripts. The Sinai library is today a remarkable treasure for the antiquity and the significance of its volumes.

The library contains 3304 manuscripts, written in eleven languages. These are predominantly Greek, Arabic, Syriac, Georgian, and Slavonic. The manuscripts range in content from copies of the Scriptures, services, and music manuscripts, to sermons, writings of the Fathers, lives of the Saints, and books of inherited spiritual wisdom. The library also includes medical treatises, historical chronicles, and texts in classical Greek, which is the pinnacle of the Greek language.

A few of the manuscripts are splendid works of art, with gilded letters and brilliant illuminations, created in Constantinople in the tenth, eleventh, and twelfth centuries, when the City was at its height as the centre of culture and devotion. But no less significant are the humble manuscripts written at Sinai, often on reused parchment, bound between rough boards, the pages stained from long use, a witness to the deprivations and austerity of Sinai, to the generations of monks who have maintained the life of devotion and the cycle of daily services at this holy place.

But perhaps we would come to a greater appreciation of the Sinai library if I could describe four manuscripts in particular, all of which have been recently studied by scholars.

Saint Catherine’s Monastery is a treasury filled with things new and old. Scholars still have much to learn from its library, its numerous icons, vestments, ecclesiastical vessels, its architecture. In all of this, it is a veritable ark in the wilderness.

See also a few related posts from John Chitty on the Sinai manuscripts: 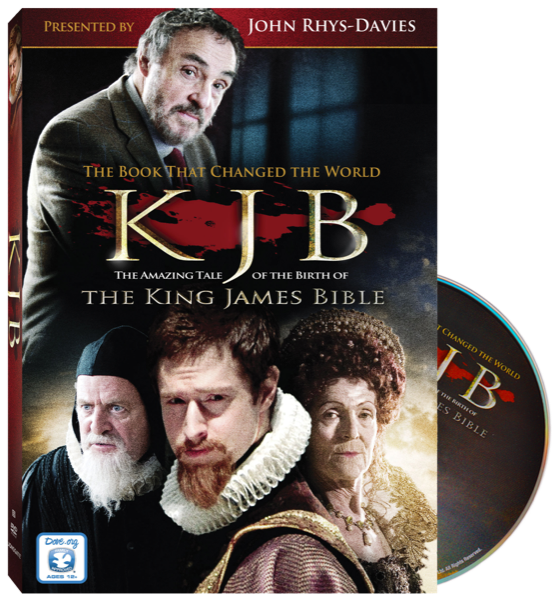 Westminster Bookstore has a special deal on the DVD documentary: KJB: The King James Bible – The Book that Changed the World. This DVD is a first-rate and tells the story of the making of the King James Bible well. I have reviewed the DVD in full here.

At 40% off the regular retail price, this may be the time to pick up this DVD. You can also compare the price at ChristianBook.com and Amazon.com.

Here is the trailer:

We're blogging our way through the
King James Only debate.

Learn more about this blog, and check out our sister site: The King James Only Research Center.

•The Misadventures of Captain Headknowledge

•The King James Only Research Center